In this guide we install a program which is available through Zero Install, but without using the Zero Install software itself. Instead, we will perform each step manually, as an educational experience.

Choose a program to install from the list of feeds. A program with one dependency is ideal (the more it has, the longer it will take you to install it!). I'll be using Edit for this example.

Open the feed for Edit above in your browser. The feed is an XML file listing the available versions of Edit. Your browser should render it as a web-page: 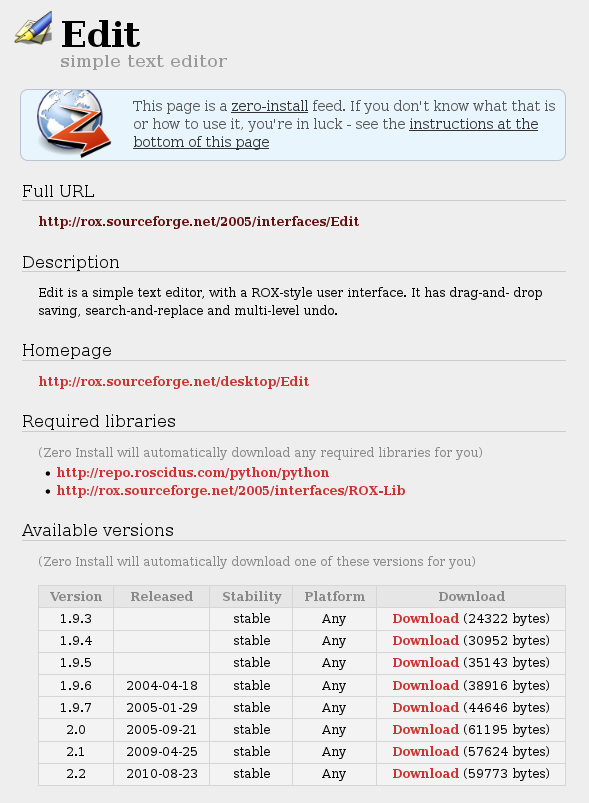 Use View Source to see the XML. We'll use this information to download and run Edit.

Why should we trust this XML document? Who made it? Could someone have tampered with it?

Each Zero Install feed has a digital signature. You can find it at the end of the feed. It looks something like this:

This is a GnuPG signature, but Base64-encoded so that it can go in an XML document. To check it, we need to reverse the encoding, which is easily done with a little Python. Save the two lines of random-looking characters to a file (encoded-signature) and decode it:

Now remove the whole signature block from the XML (every line from <!-- Base64 Signature onwards), save it as Edit.xml, and check it with GPG:

If you don't have the feed author's key, you can get it from various places (in the normal way), or by fetching it from the same directory as the feed, e.g.:

This all tells you that the XML file was created by the owner of the key and hasn't been tampered with. How you decide to trust the key itself is up to you, but one way is to check it using the default key information server:

In any case, you should make a note of which key was used so you can ensure it's the same later, when you check for updates.

Edit's feed lists several versions. I'll pick the latest one: version 2.0. If you find that version to be buggy, you might make a note of that and try a different version. Some may have been released recently and be marked as "testing". Whether you skip such versions is up to you. The relevant section of the XML file is this bit:

This tells us that we can get Edit version 2.0 by downloading edit-2.0.tgz and extracting the edit-2.0 directory inside it:

How do we know the archive hasn't been tampered with? The author of the XML feed calculated a cryptographic digest of the archive's contents and stored it in the feed:

We can calculate the value ourselves from the directory and compare (we already verified the signature on the feed, so we know that one's OK). Calculating the value is a little tricky; you have to create a manifest file listing all the files and directories in the archive, along with their digests too, by following these instructions. We'll cheat, by using 0install to generate it for us:

This says we have a directory called Edit containing a file called .DirIcon, and so on. The last line isn't part of the manifest; it's the digest of the manifest itself. It is this value that must match the id in the feed. It's useful to save the manifest output (minus the last line) in case we want to do an audit later:

This file will have the digest we require:

We've downloaded and unpacked Edit. How do we run it? We don't have to guess; the answer is in the XML feed file:

There was no main attribute on the implementation element, so we look in the containing group and find one. This tells us that we can run the program by executing the file Edit/AppRun inside the unpacked directory.

If the program you picked didn't have any dependencies then it should now run (lucky you!). But, like many programs, Edit needs libraries to work.

Our program needs some libraries before it will run. Which ones? Again, the feed XML tells us:

Go back to step 1! You need to download ROX-Lib's feed, check the signature, pick a version, download and unpack the archive, check the contents' digest, and check whether ROX-Lib in turn depends on other libraries (it doesn't).

OK, so you've got ROX-Lib too now. Things should look like this:

How can we tell Edit where we put ROX-Lib? Again, the answer is in Edit's XML file:

We need to add a directory inside our unpacked ROX-Lib to the $PYTHONPATH environment variable, and then try running Edit again:

So, what have we achieved? We've installed a program and its dependencies. We haven't touched anything outside of our test directory; no other programs on the system have been affected by this installation. We didn't need root access. We can undo the installation just by deleting our two XML files and the two unpacked archives.

We didn't need to run any code from either Edit or ROX-Lib to perform the installation (we only ran them to test that it worked). If you have software for running programs in a restricted environment, you can install and run programs without even giving them write access to their own code.

Finally, although it may have been a little tedious, everything we did could be automated. You could write a program to do all this for you (or use ours!).

Our home directory will become a big mess if we just install things in random directories. When we want to run another program that uses ROX-Lib, we'll want to be able to find the copy we already installed rather than downloading another copy.

These files don't really need to be backed up. If we lost them, we could just download them again from the web. So, we'll put them in the ~/.cache directory which is designed for just this purpose. In fact, to avoid conflicts with other things using this directory, we'll keep everything under ~/.cache/0install.net, because it's all related to Zero Install.

We have two XML files and two directories. What should we call them? It's not impossible to imagine there being two programs in the world both called Edit, so that's not a good name; we wouldn't know what to do if we wanted both on our system at once! A good choice is to use the full URL of Edit's feed for the XML file (replacing / characters with %2f in the traditional web way):

It's a bit ugly, but at least it's unique and we can find it again. We'll store ROX-Lib's XML in the same way:

What about the directories with the actual program files? We could use the same strategy, naming it from the URL where we got it, but this has some problems. For example, there might be lots of places where you can get the archive (mirrors, peer-to-peer, CD-ROM, etc). We don't care how we got it, all we care about is that it has the right digest. So, we'll name it after that!

This is exactly the scheme that 0install uses. We can test this quite easily:

Zero Install runs Edit without downloading anything. It is able to use the files we downloaded and placed in its cache manually.