Releases with source and binary packages¶

0release can be used to create releases of your software from a version control system. The main page described how to make releases of programs which are architecture-independent (e.g. programs written in Python) where a single package is produced. This page explains what happens for programs which must be compiled for different architectures (e.g. C programs). 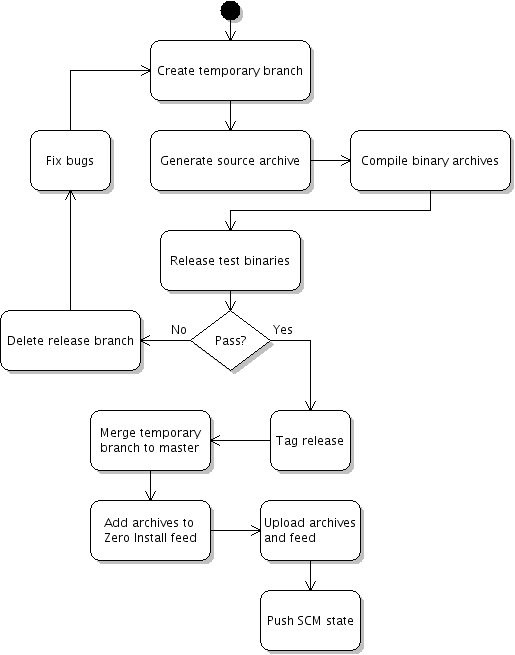 After generating an archive and a feed for the source code release candidate (where arch='*-src'), 0release also compiles a binary for the host system (using 0compile). It uploads both the source and binary archive and publishes both in the Zero Install feed.

For an example of a simple binary package that works this way, have a look at the c-prog.tgz package in 0release's tests directory:

This defines two builders named host and precise32. host simply runs 0release in build-slave mode on the local machine (in fact, you don't need to specify this section because it exists by default). The precise32 builder run a script (see below) to bring up a VirtualBox virtual machine, submit the build to it, and then shut it down again.

The build command is called with four arguments:

The three names are of files in the current directory without the directory part; this simplifies the copying. The build command must do three things:

Setting up a Vagrant build slave¶

First, we'll need to create a "box" with the build system. Create a Vagrantfile for the new box, e.g.

The bring the machine up and install the basic build environment. The only package required by 0release is 0install itself, but you must also install any system packages that are needed by the software to be built (i.e. those which can't be installed by 0install automatically):

Now package the VM into a new box and add it. You might wish to create a Vagrantfile.pkg to enable a shared 0install cache (see Virtual Machines / Vagrant).

Create the build-on-vm script, make it executable, and place it in your $PATH (on the host):

You can then use it in your builders.conf, as above.