The Windows version of Zero Install extends the cross-platform core Zero Install .NET with a GUI and various OS-specific integrations.

The Linux version and Windows version of Zero Install share the same feed format. For most common use-cases they behave identically on the command-line. There are however some OS-specific differences.

When Zero Install is started by the Bootstrapper it is running from the cache and is not integrated into the system. There are no start menu entries, the command-line tools are not in the PATH, etc.. This is by design; after all you may only need Zero Install once on that particular machine or may decide you don't like it. In that case you can simply delete the Bootstrapper EXE when you're done.

If you then decide you wish to keep using Zero Install you can "Click to setup...". This applies desktop integration for Zero Install (start menu entry, command-line tools in PATH). It also installs the Store Service if you choose to setup Zero Install "For all users". 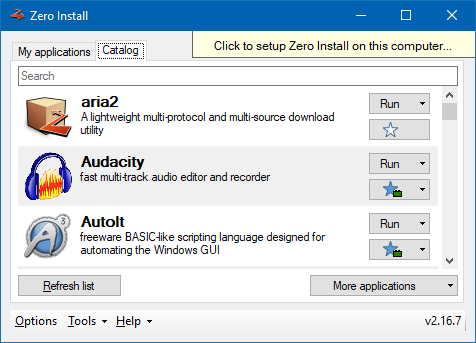 This is different from the desktop integration Zero Install performs for other applications. For these Zero Install will create little stub executables in the appropriate locations that point to the application's feed. However, for Zero Install itself the entire binaries need to be copied to a permanent location. Otherwise each of these stubs would need to bundle all the functionality of the Bootstrapper in order to locate (or potentially download) Zero Install.

Having a specific version of Zero Install copied to a fixed location would seem to undermine many of the advantages of Zero Install, such as background updates of applications and running multiple versions side-by-side. However, Zero Install can still download and run other versions of itself from the cache. When you tell your deployed instance of Zero Install to update itself it does just that: The new version is downloaded and launched from the cache and instructed to deploy itself to the same location as the existing deployment. The old files are securely replaced using the Windows Restart Manager and rollbacks in case of error.

The regular Bootstrapper (zero-install.exe) is a GUI application, but there is also a command-line version (0install.exe) available. If you pass command-line arguments to this executable it will first download the full version of 0install and then pass those arguments through. This makes it great for single-use applications or scripting:

You can also use the command-line version of the Bootstrapper to integrate Zero install into the desktop environment:

Zero Install is designed to be mostly maintenance-free (automatic update checks, etc.). You can use the following commands for additional control where needed:

If you wish to run these commands in automated scripts, add the argument --batch to prevent interactive prompts.

To set up Zero Install on a USB thumb drive:

You can now use your thumb drive to run Zero Install on any computer running a recent version of Windows. Zero Install stores downloaded applications directly on the stick so you can access the same applications everywhere. Please remember to always "eject" the thumb drive in Windows before disconnecting it from the computer.

The applications launched by Zero Install are not automatically made portable by this. They still store their settings in the usual locations. Please make sure to move these files to the thumb drive as necessary.

FAT/FAT32-formatted drives cannot be used for Zero Install because they do not store file security settings (ACLs). They also only store time with an accuracy of two seconds while Zero Install checks the exact modification time of files.