There are two common situations:

To make source code available for others to use you need to add source implementations to the program's feed file. This is almost exactly the same as adding binaries, except that you give src as the machine (CPU) type: 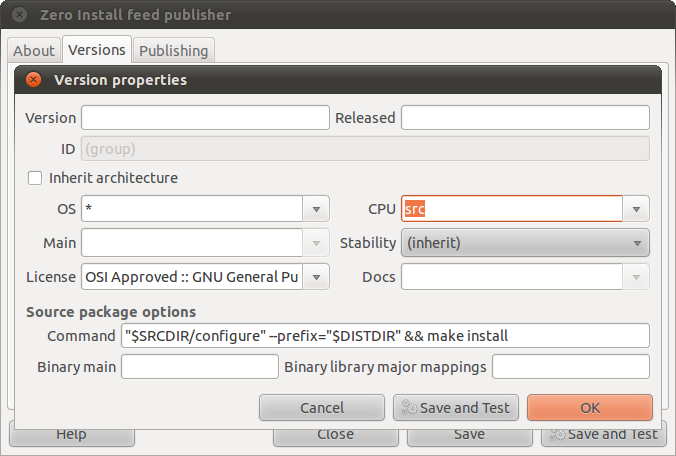 (if you want to script this process, take a look at 0template)

You can also edit the XML directly, which gives more control. A minimal source implementation might look like this:

You only need to use arch='*-src' to publish implementations for things that need to be compiled. Shell scripts, etc should not be marked as source code; use arch="*-*" instead (which is the default anyway if arch is not given). For header files (-dev packages), there will often be a source implementation that generates the header files, but the resulting headers are not source (and will often be architecture-specific, e.g. Linux-i386).

The job of the compile command is to call the actual build system. It is executed inside the build directory ($BUILDDIR). It must compile the source in $SRCDIR, putting the final result (ready for distribution) in $DISTDIR. The path to the generated feed for the new binary is $BINARYFEED, if you need it during the build.

Instead of giving a <runner>, you may prefer to use a shell command. This is useful if you need to run more than one command. However, if the command starts to get complicated, you should move it to a script, either inside the main source archive or in a separate dependency, and just set this attribute to the command to run the script):

Starting with 0compile 1.1, this even works on Windows (it uses win-bash).

There are also some extra attributes you can add to the implementation element:

compile:binary-main
Deprecated. Use <compile:implementation> instead (see below).
compile:dup-src
Some programs insist on creating files in their source directory, which is typically a read-only directory when using Zero Install. In this case, set compile:dup-src='../img/true' and 0compile will copy everything in $SRCDIR into build before building.
compile:binary-lib-mappings (binary library major mappings)
This is needed if you want to use 0install to compile a -dev package (containing header files) that works with a distribution-provided runtime package; see MakeHeaders for details.

You can specify a template <implementation> for the binary using <compile:implementation>. You can use this, for example, to add <command> elements to it. Here's a more complex example for a Java program:

The interesting bits here are:

arch="*-src"
tells us that the root <implementation> describes some source code.
<compile:implementation>
this is the template for the implementation that will be created by the compile.
arch='*-*'
indicates that the generated binary is platform independent (Java bytecode).
<command name='run'>
says how to run the resulting binary (by using the Java runtime).

Sometimes, you have a build time dependency with a wide range of possible versions, but the generated binary will have a runtime dependency on whichever version was used to compile it. The compile:pin-components attribute on a <version> element in the template will expand into before and after attributes that require the binary version to match the first n components of the version used to compile it. For example, if this program is compiled using Python 2.7.3, then the binary will have <version not-before='2.7' before='2.8'/>:

You can keep the source implementations in a separate file (MyProg-src.xml) and add a feed from the main feed, e.g.:

The arch attribute lets the injector know that it doesn't need to fetch this file unless it's looking for source code.

You should use the --build-base option to make distutils build to 0compile's build directory, not under the source code (which is read-only). Unfortunately, this option isn't available with the install command, so you have to do the build in two steps. A typical command is:

There are some template projects which can be used as a starting point for publishing your own software for various languages and build systems.

Example: SCons
This example shows how to compile a simple "Hello world" program using the SCons build system. Both the source and SCons are fetched using Zero Install.