0release can be used to make new releases of your software. It handles details such as setting the version number and release date, tagging the release in your version control system and updating your Zero Install feed.

The general process for an architecture-independent package (e.g. a Python program) is shown in the diagram below (releasing a source package and multiple binary packages is also possible): 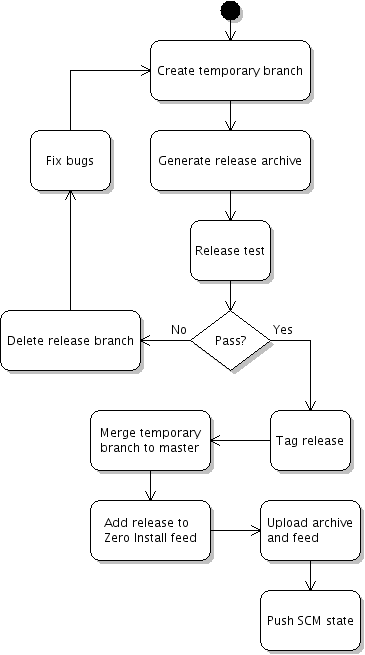 After doing some development (so you have something to release!) you use 0release to prepare a new release. It will:

You can then run any final (manual) tests on the release. If you're happy with the result, then 0release can publish it (e.g. submit the release to 0repo, and push the new commits and tag to your public version control system). Otherwise, 0release will discard the temporary branch so that you can fix the problems and try again.

You don't need to use this program to make your software available through Zero Install. You can just create a tarball using your normal process and then publish a feed for it. However, 0release can automate some of the steps for you. It's especially useful for new projects, where you don't yet have an established process. Having a program to handle new releases brings several advantages over doing it manually:

Git is fully supported. It should be fairly easy to support other (distributed) version control systems.

You'll need a local feed within your source directory (under version control). This contains the same information as a normal published feed would (name, description, dependencies, etc). The only differences are:

Having a local feed is useful even if you don't use 0release, because it lets people check out a development snapshot of your program and then register it (using 0install add-feed) or run it directly with Zero Install handling its dependencies.

A minimal Hello World example is available for testing. You can check it out like this, using the Git version control system:

To check that you can run it, use 0install on the feed:

HelloWorld.xml is the local feed. Its contents look like this:

Note the <feed-for> element. This is where the main feed is (or will be) published. If you want to follow this tutorial, change it to point to a location to which you can upload files (e.g. http://localhost/~me/testing/HelloWorld.xml) and commit the change (git commit -a).

You should add any dependencies inside the <implementation> element (see the feed specification for details, or edit the feed using 0publish-gui if you want a graphical interface). This example program is so simple it doesn't have any dependencies beyond its interpreter: Python < 3

Each time you create a new release, the resulting files go in your releases directory. Create the directory now and then run 0release inside it, giving it the location of your local feed.

This will create a single executable file in the directory, called make-release. Run this whenever you want to create a new release of your software.

Do not put make-release under the project's version control! First, because it contains user-specific information, and secondly because if you make a mistake then 0release will make you retract the release and restart the whole release process from the beginning because you changed a file that's part of the release... this is not fun ;-)

When you want to make a new release, simply run the make-release script, like this:

You are prompted to enter the version number for the new release. You can just press Return to accept the default of 0.1 (since the version in the local feed was 0.1-pre). It then prints:

0release has now created a candidate archive for you to examine. You might like to try running the program now. Note that the archive only contains files that are under version control.

You can either leave 0release running while you check it, or you can press CTRL-C to exit and run the make-release script again later. It will remember where it was (it stores the current status in a new release-status file).

As well as exporting the release archive, 0release also updates your Git repository by committing two new revisions. You can see them using gitk --all:

The lowest two revisions are the history you started with. The master branch adds the commit where you changed the <feed-for> element. This is also the currently checked-out version. 0release has created a new branch called 0release-tmp with two new revisions. Release 0.1 is the version that will be released. Its local feed has the version 0.1 and today's date as the release date. The archive was created from this revision. The next revision has a version of 0.1-post and removes the release date again. Note that the release hasn't been tagged yet in Git, but 0release has recorded the revision ID in case you decide to accept the release candidate.

If you discover any problems you can go ahead and commit a fix, which will appear on the master branch (not on the 0release-tmp branch, which will be discarded if you fail the release).

Looks good. If you killed the release script (with CTRL-C), run it again now to return to the Publish/Fail prompt. Choose Publish (you can just type p<Return>).

0release will sign the release tag using your GPG key. If you don't have one, use gpg --gen-key to create one now. If you have multiple keys, pass -k ID to 0release to choose which one you want to use.

The temporary files (release-status and the extracted helloworld-0.1 directory) are removed, and it creates a merged.xml feed. In our case, that's just the same as the one we tested, but if we were releasing a program that needed compiling, it would gather together the source and all the binaries into one feed here.

Finally, it hands this off to 0repo:

If you check your Git repository, you'll see that 0release has now tagged the release, and updated the "master" branch to the tip of the temporary branch:

If your program needs to be compiled, see Releasing binaries.

You can abort a release easily at any point before the Publish step. Once you select Publish, externally-visible changes start to be made (e.g. archives are uploaded to your file-server).

To abort before publishing
Just select Fail from the menu. This deletes the release-status file (which you could also do manually). To avoid confusion, selecting Fail also removes the temporary release branch from Git and renames the release directory (to $version~) to make it clear that they're not being used.
To abort after publishing has started
Follow the steps in Unpublishing a release below to undo any publicly visible changes. Then delete the release-status file.

So, you didn't test the release properly, and now you want to pull it down, eh?

The best way to do this is to set the stability to BUGGY in the public feed (and re-run 0repo to regenerate the signature), and then publish a new fixed release, with a new version number.

But if you really insist on trying to unpublish a release and pretending it never happened, here's what you have to do:

Do I need to keep the releases directory?¶

It's best to keep the releases directory:

So, there's nothing too critical in the directory, but it's easiest to keep everything.