On systems with multiple users, it would be very inefficient if each user had to download their own copy of each program. Most packaging systems require users to have root access in order to share software (either the root password, or admin access through sudo). However, this is a security risk. Zero Install allows software to be shared automatically and safely between mutually-untrusting users.

A digest is a short value calculated from a (usually much bigger) file. There are various different algorithms that can be used. For example, this command calculates the SHA1 digest of the ls binary:

A cryptographic digest (like SHA1) is one where it is believed to be infeasibly difficult to create a different program with the same digest. So, if someone gives you a binary with digest above, you can be sure that it's identical to the version of ls that I'm using.

Cryptographic digests are the basis of secure sharing in Zero Install. Here's we'll see an example of how two users (Alice and Bob) can share the ROX-Filer program, even if they don't trust each other. 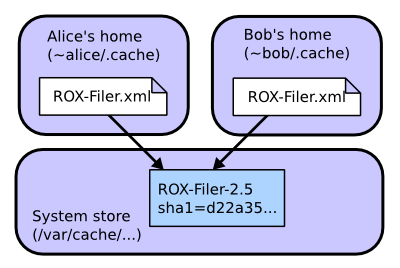 Later, Bob decides to run it too. The system doesn't need to download a second copy:

But what if we have a malicious user, Charlie? A new machine arrives, and Charlie decides to install a malicious version of ROX-Filer before anyone else installs a good copy:

When Alice runs ROX-Filer as before, the software sees that /var/cache/0install.net/implementations/sha1=d22a35871bad157e32aa169e3f4feaa8d902fdf2 doesn't exist and downloads a genuine copy as before. When Bob runs ROX-Filer, he will use Alice's version.

You might be worried that Charlie was able to put malicious code in the shared cache. However, it doesn't matter because other users won't try to run it, since it doesn't have the name they're looking for. Of course, it might not even be malicious: a program that deletes files is malicious if it's called cat, but not if it's called rm. As long as users don't go around running random binaries they find in the cache, they're OK.

The actual code for doing sharing this way is currently experimental and not enabled by default. This section shows how the system administrator (someone with root access) can enable it. It is probably best not to do this in security critical environments yet as we're still working on tightening the security. Feedback welcome.

This diagram shows the four processes involved in adding a new package to the system cache. If you have a different environment, you can use a different 'helper' script to integrate it with Zero Install.

The path will be /usr/local/bin/0store-secure-add if you installed from source.

The NOPASSWD line must go at the end of the file, otherwise it is likely to be overridden by later entries. Again, use /usr/local/bin if you installed from source.

When launch wants to install a package, it will invoke 0store-secure-add-helper. This script uses sudo to run 0store-secure-add as the zeroinst user, with a clean environment. No password is required for this.

The following AppArmor policy can be used to confine the 0store-secure-add process somewhat. However, the process does need read access everywhere (since it could be copying from anywhere) and write access to the entire cache directory, so this doesn't restrict it much more than it already is due to running as a separate user.

The normal Zero Install user process communicates with the service using named pipes. The user process is responsible for downloading and extracting archives. It streams the extracted file metadata and contents to the service. The services verifies the manifest digest and writes the files to the disk. See the API docs for more information on this protocol.

The service records all write operations and errors in the Windows Event Log.

How do users uninstall?

Currently, they can't. You (the admin) can delete directories from /var/cache/0install.net/implementations to save space (preferably not while they're being used ;-). Ideally, we should track which users have requested which programs and remove them automatically when no-one wants them anymore.

What kind of things need 'tightening'?

Why do things still get stored in ~/.cache after setting this up?

Things you've already installed will remain there. Only new software is added in the system cache. Also, the old sha1 algorithm isn't accepted by the helper, so software using that can't go in the shared cache. If you still have problems, try running 0install run -vvc URI (to see debug output). Finally, make sure your script is executable!